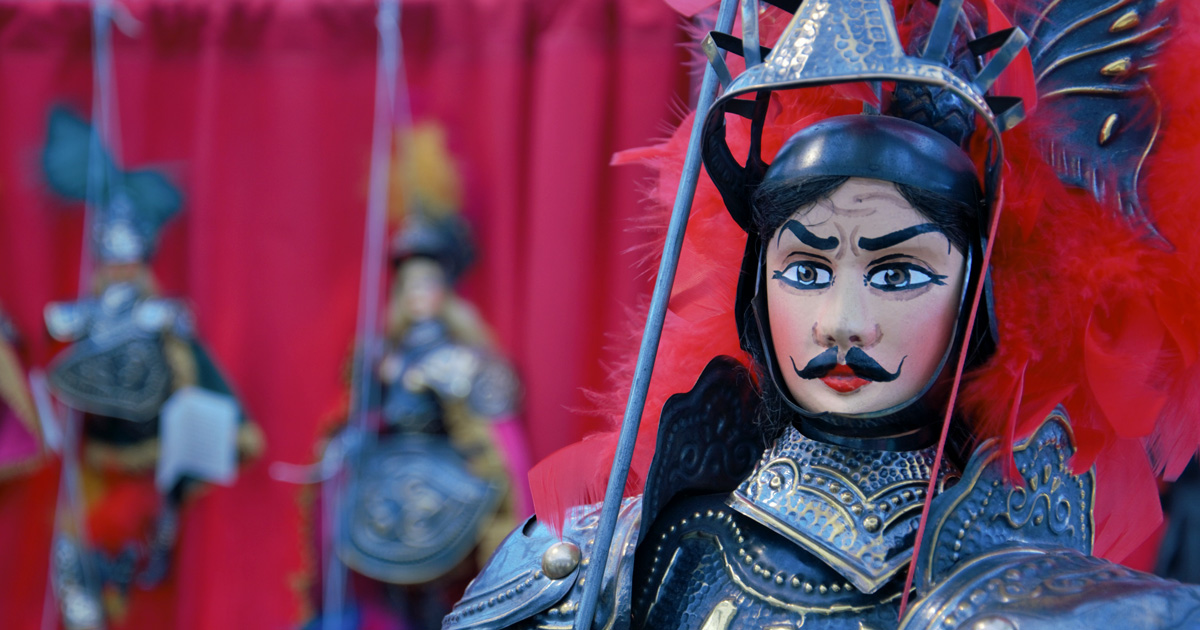 In a small alley named after Pietro Novelli, in the heart of the Palazzo Asmundo in Palermo, there is a small colorful and lively theater, where you enter with deep respect, as if it were a church, to admire and interact with the great historical and anthropological heritage made of puppets, posters, backdrops and theatrical sets. It is the Sicilian puppet theater of the Argento family, the Opera dei Pupi, an iconic piece of Sicilian culture, a ritual whose essential ingredients are passion, death and revenge, and a “masterpiece of the oral and intangible heritage of humanity,” as defined by UNESCO.

To understand the art, culture, and history of the Argento family, puppet masters for five generations, you need to go as far back as Vincenzo, called Don Cecé, founder of a real “puppet theater” dynasty, who in 1893, still a child, brought to life his first puppets playing with pieces of wood.

His passion led him to learn the trade from Pernice, a famous puppet master of the time from Palermo, who taught him the art of wood carving, the relief engraving of copper and brass suits of armor, and the painting of background scenes and posters. With Don Cecé, who wrote the scripts and gave the characters their voices, he participated in the production and staging of the shows together with his wife, Provvidenza, who with her skilled hands made the costumes and who gave birth on stage to the last of their six children, Giuseppe, while the paladin Orlando was overwhelmed with rage and madness, after reading the love messages exchanged between Angelica and Medoro, engraved on the bark of the trees.

Giuseppe ensured continuity between generations, with his son Vincenzo who, born into art, still today makes his puppets with his own hands, keeping alive the Opra (an abbreviation used by puppet masters for the Opera dei Pupi). The Argento family is considered one of the last families of puppet masters in Sicily today. Don Cecè, immortal in the small theater in the heart of the Palazzo Asmundo, lives on in the ancient text of “The Story of the Paladins of France,” by Giusto Lo Dico, who in 1903 rewrote in prose the most important works of Renaissance chivalric literature, such as Rinaldo by Tasso, the Mambriano by Cieco da Ferrara, the Orlando Innamorato by Boiardo, the Orlando Furioso, the Cinque Canti (Five Cantos) by Ariosto and the Morgante by Pulci.

Nicola, Dario and Anna Argento, Don Cecè’s great-grandchildren, call it the “Puppet Master’s Bible.” After being raised with bread and the stories of Charlemagne, Orlando, Rinaldo, Angelica and Gano di Maganza, in 1999, they inaugurated the Teatro Argento, on the ground floor of the Palazzo Asmundo, one of the most iconic and beautiful late Baroque residences in Palermo.

And it is in this fortunate little recess, surrounded by intense colors, magical creatures and alchemy, that the Sicilians’ feeling of belonging is reflected. Once the doors are closed and the lights go out, we enter the magical world of the wooden puppets, which, dressed, polished and adorned with shining armor, remind us of the great literature of chivalric poems, the ancient French chanson de geste, and the major works of the Renaissance: Morgante by Luigi Pulci, L’Orlando Innamorato by Matteo Maria Boiardo, and Orlando Furioso, by Ludovico Ariosto.

The theater’s curtains open. The puppet masters’ hearts beat in the chests of the puppets, whose pace is that of the puppeteers’. The voices of the characters and the clanking of duelling swords echo on stage. The enchantment of the Opera dei Pupi begins, shrouded in the charm and value of the Sicilian oral tradition, where good always wins over evil, justice over injustice, and life over death. 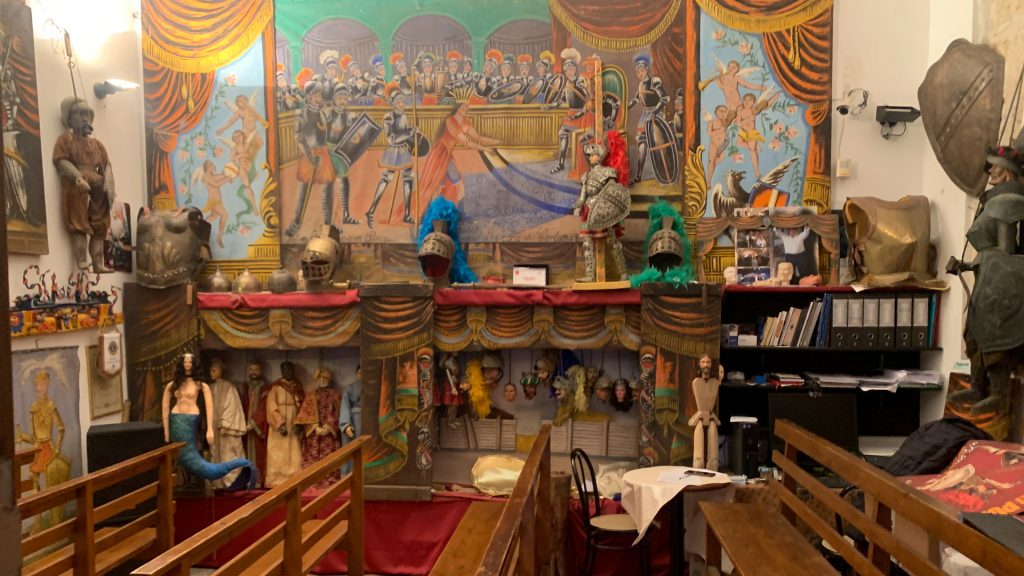 “It’s a mission, a passion, a craft. I grew up among puppets and puppeteers,” says Nico Argento. “With my brothers Dario and Anna, and in recent years also with my nephew, Vincenzo, we have kept the legacy of my great-grandfather, Don Cecè, alive. Our handcrafted puppets are 90 centimeters (about 34 inches) tall and weigh about 8 kilos (almost 18 pounds). The knees are articulated and a wire, connected to the rod in the right arm, goes from the fist to the edge of the sword so the puppet can draw it with speed and skill. We are the only ones who maneuver the puppets without the leather bracelet, which makes their movement more cumbersome. We hand-paint the posters and sets, we chisel the shields and polish the armor. My sister, just like great-grandmother Provvidenza, searches for ancient fabrics to sew the costumes. The puppet master is an all-around, expert and complex figure. We write the texts for the scenes of the stories and narrate the strong historical and artistic identity of the Opera dei Pupi, always keeping it up with changing times. Researching ancient volumes of epic poems and studying them to adapt their texts requires extensive historical knowledge.” In conclusion, Argento explains, “In recent years the Opera dei Pupi has adapted and evolved, responding to the demand for updating the oral heritage. The values of social justice are enshrined in the anti-mafia creed of the judges Giovanni Falcone and Paolo Borsellino and in the great ethical values of Don Pino Puglisi, murdered in Palermo on the day of his 56th birthday. These are poignant depictions, where understanding the events becomes an easy task. We take pride in our craft.”

Every day, at 5:30 pm you can watch the Opera dei Pupi at the Teatro Argento, in via Pietro Novelli 1, Palermo. It is possible to watch how the puppets are made at the workshop of the Argento family.