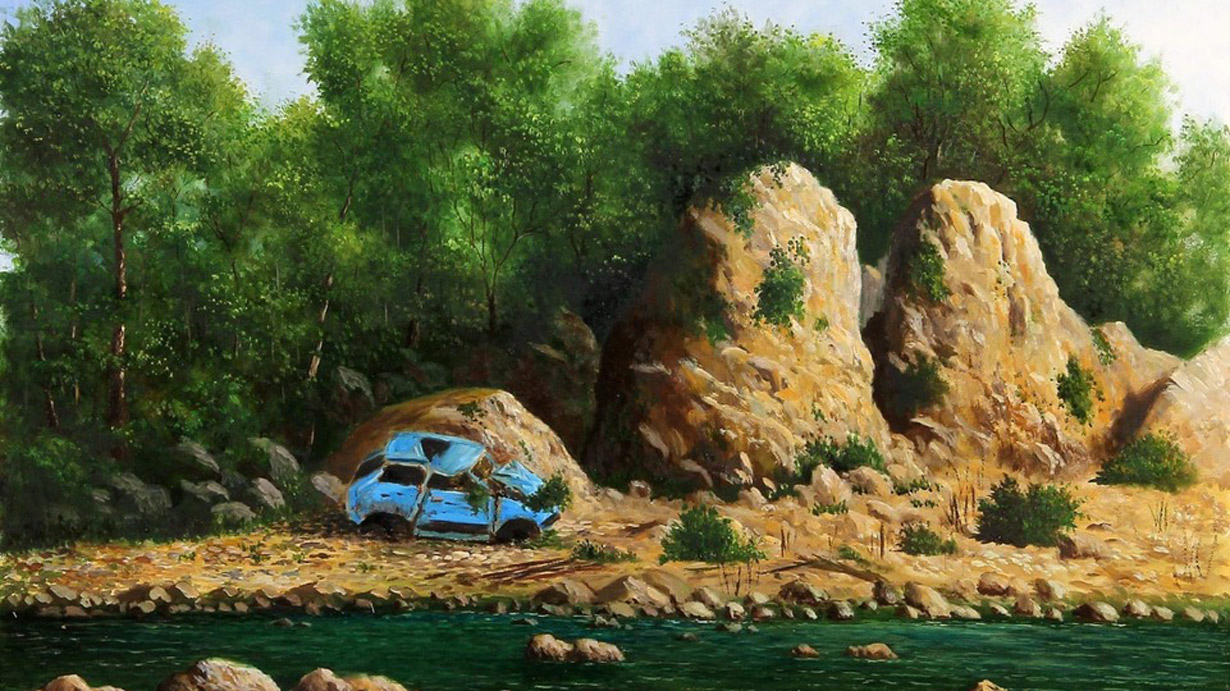 Fighting and raising awareness against the degradation in nature caused by man, using the paintbrush. A tale of enchanted places that open up unique scenarios of beauty in our territory. This is the work of Marisa Battaglia.

There are many legacies that we will take with us after this pandemic period, including one in particular: that of imagining ourselves many times elsewhere. An escape from everyday life, a desire to escape from seeing the same walls where we have been forced to live with others and ourselves for so long, without any outlet.

In these two years, each of us has adopted our own contrivances.

Some have preferred to have their escapes accompanied by characters from TV series or by cooking.

Those who, like me, on the other hand, took that ‘excess’ time to tidy up a bit. And for me it was the bookshelf inside my house, the result of years of eager accumulation of books, magazines, catalogues and materials of which perhaps only 30 per cent I actually read and studied properly.

And between feelings of guilt for not having paid the right amount of attention to that infinity of selected materials and the desire to make up for this lost time as soon as possible, the catalogue of Marisa Battaglia’s works, given to me some time before by the artist herself, opens up in my hands.

And it is an escape.

I decide months later to call Marisa, to get a better account of how everything seems to be arranged to make peace with me and so many other viewers in her paintings.

“Around the age of 30, I started painting as a self-taught artist, putting many colours together at first, between informal and impressionistic. Then I felt the need to improve myself and I started to take courses, such as enrolling at the Academy of Fine Arts in Palermo at the Free School of Nude and courses in life drawing and painting’.

And it is drawing, the academic study, that manages to liberate Marisa with thought and brushstrokes. “It has helped me a lot to broaden my artistic panorama, especially the comparison with colleagues”.

The first painting where Marisa finds herself, objective and sentiment coincide, is the Tonnara dell’Orsa. “Architecture from the 16th century that exists on the coast towards Punta Raisi, an ancient Benedictine tuna fishery that has been abandoned over time. Now it has been recovered and used for private events and entertainment, it has become a beautiful place but I had my eye on it from before for its unique beauty’.

And Marisa, beauty, intercepts it, stops it, reinterprets it, and is also an active part of it. This is demonstrated by the numerous works and interventions on the Oreto river, her heartland, the one whose beauty and potential the Palermitani do not know today because they are blinded by neglect.

Marisa tells us about the beauty of the river, opens up scenarios and helps us understand what the Oreto is capable of giving us.

“In the middle stretches of the river, even though there is this form of pollution inside the water, I wanted to represent the beauty of the landscape, which is certainly also the strength of this river. If it were not so beautiful to experience, I think it would not attract our attention, our interest. Instead, it is precisely in its immensity of colours, scents, even in the botanical variety that makes it so beautiful and fascinating, in my opinion it is right to highlight this naturalistic landscape aspect. There, the licence to paint was more directed towards beauty rather than ugliness, which is there anyway’.

He married the river Marisa, he would like to see it reborn as it gushes out at spring level: it comes out pure, and we have defaced, polluted and dirtied it. And we even complain about this open-air dump, even though it is our fault.

There were many initiatives, such as Oreto d’Arte with the many activities and workshops in which the community was involved, young and old alike.

Activism and multi-facetedness are the driving forces behind Marisa Battaglia, who has also designed a line of clothing, including bags, scarves, dresses where her paintings are worn, they circulate among us, they tell of the beauty we are blessed with but do not realise exists.

But her work encourages us to escape, and not only through her canvases, but directly into those places that she masterfully depicts, and which are all to be discovered and protected.