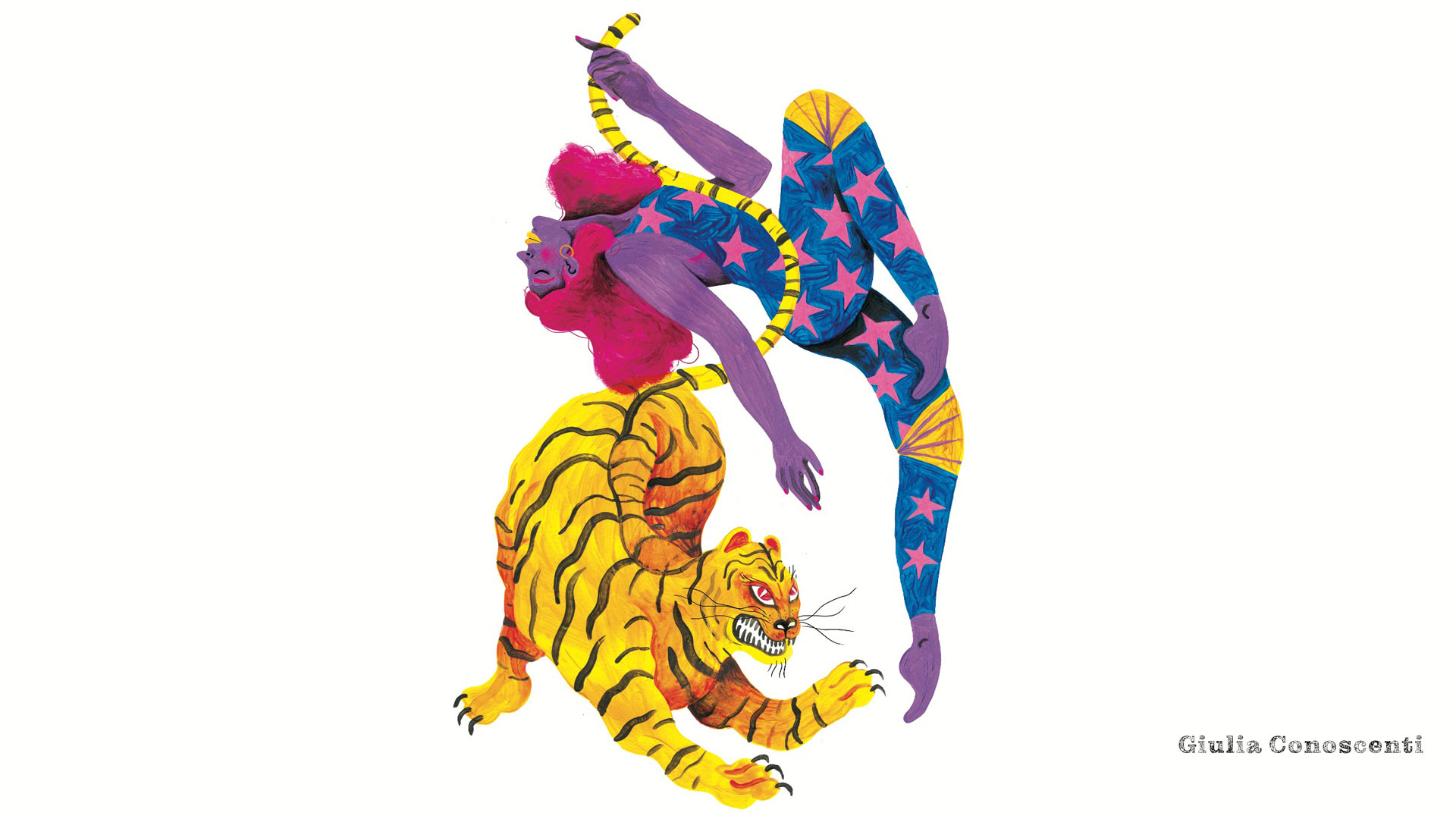 She has worked with Gucci, Primark, Barilla: who is Giulia Conoscenti, the Palermo-born illustrator with dishevelled and vibrant designs.

Anyone who is Sicilian must, at least once, and I stress, must have seen the work of the puppets. To be enchanted by the legendary tales of Orlando, of the Paladins of France, but even more so by that very ancient sound, rooted in our blood, of the top hat piano and the trumpet, which fits so well with the change of the always hand-painted, colourful, trembling, fantastic set design.

When I asked Giulia Conoscenti, a Palermo-born illustrator and designer with the sea in her eyes, to have a chat with us, at the end of the two hours we spent together, I wondered ‘who knows what an entire puppet opera stage illustrated by her would be like, puppets and dolls included’.

Giulia’s artistic vivacity and identity roars. She who at the age of thirty already teaches four university classes, has collaborated with the likes of Barilla, Gucci, Primark, Zanotta and has decided to return home, to her Palermo, strong in the knowledge that this work, that of illustrating and narrating through images, can be done anywhere, but with her foot out a little.

Giulia’s works are unbelievably material, keys to escape into absolutely different worlds: now circus, now mysterious, now tribal, now Sicilian, now bestial. A multitude of subjects that fibrillate and fascinate, magnetising the eye with their fluorescent but never exaggerated colours. One can read very well the great study and research work he undertakes before each brushstroke.

And all this he also conveys to his pupils, very young ones, who in beautiful Ortigia he takes them out of the classroom, to draw and interact with the world, to make them put aside those privacy schemes induced through daily doggedness to the screen, which cage and intimidate real, live contact. “Draw people,” she says, “You will see that you will learn a lot and they will be grateful to you for giving them your illustrated view.

I ask Giulia how difficult it is to survive in a world of hit-and-run images, which thinks about payments in visibility, 60 days after the delivery of the work, or even doesn’t think about payments. But she is a fighter, she gets pissed off, she shouts out loud if there is something wrong and immoral, her eyes perhaps turn neon green just like her work Quarantine, but it is only fair, I wish everyone would do it, they would stop devaluing this profession that requires the enormous effort to expose themselves, even on complicated topics, with their own honed and critical thinking.

“I don’t consider myself an artist, I am a designer: it depends on who my image is addressed to, it depends on what medium it is to be printed on, it depends on so many things, and I create that image based on a series of notions, I even change the way I represent things a lot, but with things I think. If a client asks me to do something, for example in vector, I’m sorry, I can’t say yes, I can’t ask me to change my working approach. There was a step in my journey where I did purely arm work, but on which I didn’t put my name because they didn’t represent me at all. I used to do what they told me, but now it’s quite different’.

Who knows what Giulia Conoscenti’s paladins would look like, with those swords to be unsheathed from their shining armour, on their way to a setting of secret places, perhaps riding tigers instead of horses. Who knows if we will ever know, but in the meantime we are content to travel among the splendid images in her online portfolio, which evoke and emanate that atavistic energy of which we should take a good dose every day.